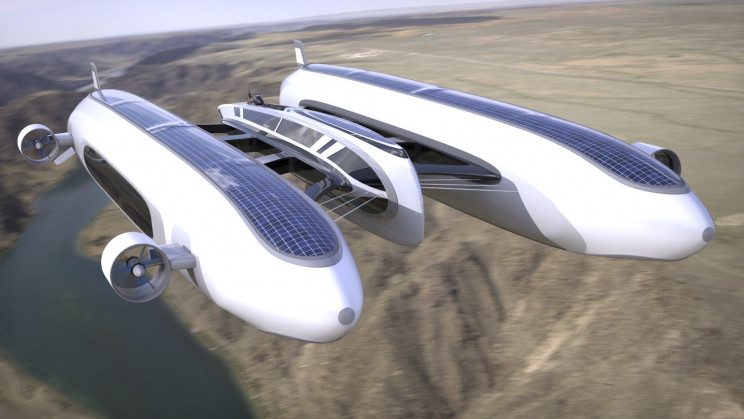 Lazzarini Design Studio released its latest effort, the Air Yacht, a floating catamaran lifted by two helium-filled blimps that sit in place of a traditional twin hull, a report from New Atlas explains.

Pierpaolo Lazzarini is known for extravagant designs such as the swan-inspired Avanguardia and his hollowed-out superyacht ‘the Shape’ design.

The Air Yacht is a new addition to Lazzarini’s series of unusual, luxurious designs. The floating catamaran is lifted by two 492 feet long (150 meters) airships connected to either side of a 262 feet long (80 meters) central hull.

The central hull is 33 feet (10 meters) wide and allows for panoramic 360-degree views of the skies and ground below. A master cabin, dining area, and living area are located in the central hull, while the two airships each host five ensuite guest rooms with large windows, allowing for a total of 22 passengers.

The twin airships are separated into hives that store up to 14.1 million cubic feet (400,000 cubic meters) of compressed helium gas. This allows the Air Yacht to fly at a leisurely pace of 60 knots (69 mph/111 kph) for slightly more than 48 hours before it needs to be refueled. When it’s sailing on the water, the Air Yacht moves at a speed of five knots (6 mph, 9 km/h). On top of the central hull is a helipad, presumably for passengers that have to get where they want to go a little quicker than 60 knots.

The tops of the two airships are fitted with solar panels that help to add power to the hybrid craft’s ultra-light batteries fueling the ship’s electric rotors. The impressive design is pitched as a sustainable form of luxury travel that doubles up as a superyacht and an airship.

Last month, another company, California-based startup H2 Clipper, revealed a more utilitarian approach to reviving the blimp. The company announced its plans to develop hydrogen airships that could provide zero-emission cargo transportation at a quarter of the cost of traditional air cargo. The company has a lot of hurdles to overcome before its concept can take flight, such as changing the long-held negative public perception of airships held ever since the Hindenburg disaster.

We might never see the Air Yacht concept become a reality, but we can already imagine it forming part of a dramatic set-piece in a future James Bond movie.