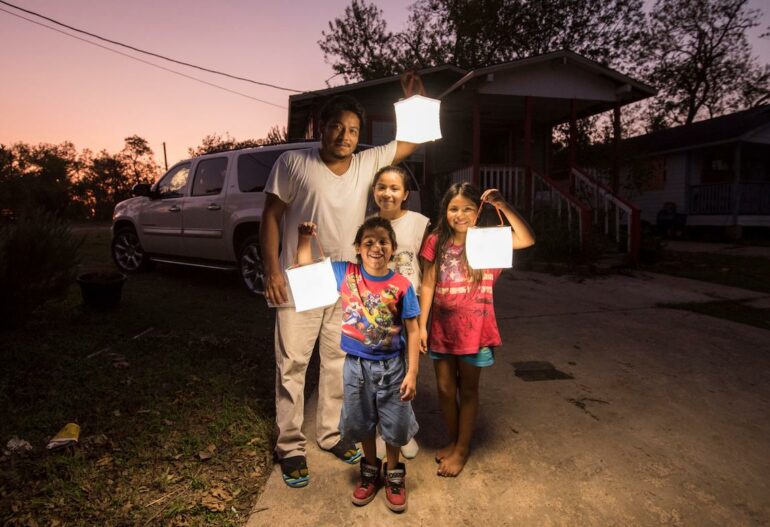 Millions of people around the world live without electricity, and thousands more can be affected when natural disasters strike, damaging electric grids. But what’s the easiest, safest way to provide light when grids aren’t available?

Since 2011, Andrea Sreshta, MBA’16, and Anna Stork have built their solar-powered light company on the idea of providing relief from darkness. The company they founded, LuminAID, has brought thousands of lightweight, easily packable lights and phone chargers to people in more than 100 countries and counting. They have collaborated with humanitarian nonprofits around the world—including during multiple natural disasters—and also sold eco-friendly products to hikers visiting remote areas.

LuminAID has strong ties to the University of Chicago Booth School of Business, where in 2012 it won the John Edwardson, ’72, Social New Venture Challenge (SNVC), a competition that jump-starts nonprofit and for-profit ventures with a social mission. In 2022, the company is looking to grow its impact after being acquired by Adventure Ready Brands, which markets a variety of first aid and outdoor recreation products.

The announcement marks the second exit or merger of a startup that’s gone through the SNVC: Late last year, 2018 winner AIM Clinics announced plans to merge with Hopebridge to scale up the autism therapy services it provides in underserved areas across the country.

The SNVC is the social impact track of the University’s business launch competition, the New Venture Challenge, run by Chicago Booth’s Rustandy Center for Social Sector Innovation, and the Polsky Center for Entrepreneurship and Innovation. As the acquisition unfolds, Sreshta will stay on in her current capacity until sometime in 2022, at which point she will transition to a role focused on expanding and supporting LuminAID’s work with NGOs and humanitarian aid organizations.

“Since 2010, LuminAID has been a passion-driven project led by our mission to make safe light and energy accessible for all,” Sreshta said in a press release. “Partnering with Adventure Ready Brands brings with it the capabilities to scale our business and humanitarian work to reach more people around the world. We couldn’t be more excited for this next step for the brand we’ve poured our lives into for more than a decade.”

Sreshta and Stork created LuminAID in response to the devastating 2010 earthquake in Haiti. The founders—then both studying architecture in New York—observed that while many valuable supplies were distributed to the island, victims didn’t have light because most portable options were unwieldy and usually required batteries.

Their solution: a lightweight, inflatable light that’s waterproof, shipped in bulk, and powered by the sun.

After handcrafting the first 50 lanterns for testing, the two filed a patent and field-tested their prototypes in India. They raised more than $50,000 through a successful Indiegogo campaign—exceeding their original goal by 500 percent—and went on to win the SNVC. In 2015, they found a powerful ally in investor Mark Cuban when they appeared on TV’s Shark Tank, earning a $200,000 investment.

LuminAID’s founders filed more patents to create solar lanterns with phone chargers—items Sreshta said are incredibly valuable in disaster situations when people not only need light but also the ability to communicate with family and relief organizations as soon as possible. Now with 12 issued patents worldwide, LuminAID has also branched out to selling eco-friendly, lightweight products that are popular among outdoorsy crowds who like to hike and camp. People also keep LuminAIDs on hand for power outages and other inconveniences, Sreshta said.

In response to disasters across the globe, LuminAID has supplied products to several humanitarian aid organizations, including the Red Cross, the United Nations’ International Organization for Migration, and ShelterBox. In February 2020, LuminAID’s global impact was recognized again on national television, this time on ABC’s 20/20 as one of Shark Tank’s “greatest of all time” companies.

“It’s incredible that Andrea and Anna came up with an idea that has global impact and strikes a chord across sectors. Their early success lent credibility to the growing work of the SNVC and the Rustandy Center,” said Robert Gertner, the Joel F. Gemunder Professor of Strategy and Finance at Booth and the John Edwardson Faculty Director of the Rustandy Center.

“The preparation for the SNVC competition was outstanding, and the feedback from teachers and peers was hugely helpful,” Sreshta said. “They didn’t just prepare us for the competition; we got our pitch stress-tested before we went on Shark Tank. Mentors and competition judges asked such great questions and poked holes to prepare us really well.”

In a press release, Adventure Ready Brands CEO Chris Heye said investing in LuminAID continues the company’s commitment to growing its portfolio of consumer-driven brands that inspire outdoor adventure. The company, based in Littleton, New Hampshire, and Kallispell, Montana, reported that the transaction closed on November 19.

“As a strong brand with a great product portfolio, driven by a powerful mission, LuminAID fits the mold perfectly for the company we are building,” Heye said. “We are strong believers in the LuminAid mission to make safe light and energy accessible for all, and we think that our brand-building and selling strengths will help bring its solar-powered products to more people across the world.”

A version of this story was first published by the Rustandy Center for Social Sector Innovation.

Previous post
Solar power will account for nearly half of new U.S. electric generating capacity in 2022
Next post
Find out the ideal temperature you should set your thermostat to this winter