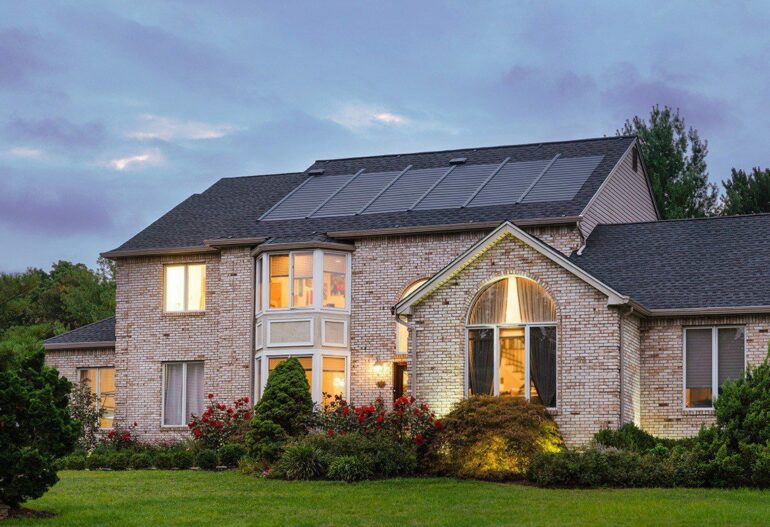 Awarded Best of Innovation at CES 2022

GAF Energy, a Standard Industries company and a leading provider of solar roofing in North America, today announced the launch of Timberline Solar™, the only roof system to directly integrate solar technology into traditional roofing processes and materials. This new system incorporates the world’s first nailable solar shingle, the Timberline Solar Energy Shingle™ (ES), which will be assembled domestically at GAF Energy’s manufacturing and R&D facility in San Jose, California—creating American jobs and delivering a revolutionary product with the potential to drive a seismic shift in residential clean energy adoption.

Timberline Solar™ is in a class of its own: reliable, durable, cost-effective, easy to install, and aesthetically superior. The ES boasts an industry-defying depth of less than a quarter-inch and integrates with traditional shingles to create a sleek and attractive look.

Over five million new roofs are installed on U.S. homes each year. One out of every four of those roofs comes from GAF, the sister company of GAF Energy and the largest roofing and waterproofing company in North America. With access to GAF’s national contractor network, GAF Energy is uniquely positioned to bring residential solar to the mass market, transforming more roofs into solar roofs each year.

“Solar roofs are the future of clean energy, and Timberline Solar is the game-changing innovation that will get us there,” said Martin DeBono, president of GAF Energy. “At GAF Energy, we have the capacity to scale this technology like no one else through GAF, bringing an integrated solar product that is weatherproof, affordable, and design-minded to homeowners across the country. We’re excited to lead the next generation of clean energy adoption.”

“Realizing our vision of a breakthrough mass-market solar roof has been our mission since we launched GAF Energy in 2019. What the team has accomplished is nothing short of extraordinary,” said David Winter and David Millstone, co-CEOs of Standard Industries. “Through our national roofing network, world-class talent, and aggressive investment in research and development, the Standard family of companies will transform the solar industry.”

In September 2021, Timberline Solar™ achieved UL’s 7103 certification, which authorizes GAF Energy to install the system on residential roofs as a roofing product and a solar energy product—the first of its kind to be recognized as both. In addition, GAF Energy worked with Sandia National Laboratories, a U.S. Department of Energy research and development lab, to verify the product’s strength, durability, and overall market readiness.

The Timberline Solar ES™ has received three awards from CES, including its highest honor, the Best of Innovation award, for “Smart Cities.” The product was also named an Innovation Award honoree in both the “Smart Cities” and “Smart Home” categories.