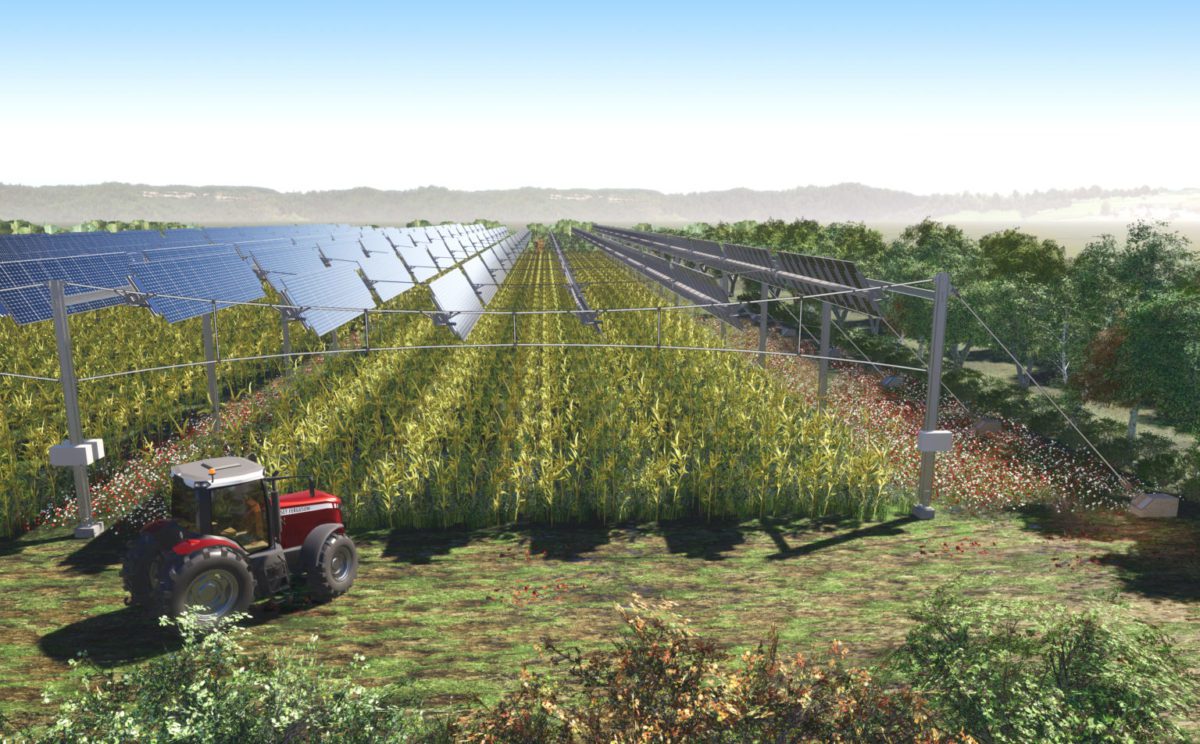 French solar company TSE has developed an agrivoltaic rotating canopy that allows large agricultural machinery to move under the panels. The solution consists of a rotating structure that can host bifacial solar modules at a height of more than 5.5 meters, with a four-post structure measuring 27 m x 12 m.

The system features a rotating canopy that can host bifacial solar modules at a height of more than 5.5 meters. The canopy is placed on a four-post structure measuring 27 m x 12 m.

“Our canopy is compatible with all agricultural machinery, including very large ones like combines, sprayers, and spreaders,” the company’s president, Mathieu Debonnet, told pv magazine.

The company said the canopy technology is particularly suitable for cereal farms that grow rapeseed, maize, barley, and vegetable protein, as well as sheep and cattle farms, with an average size of 5 hectares to 10 hectares.

The canopy is equipped with weather sensors that regulate the movement of trackers that orient the solar modules along the axis of the sun from east to west and according to the weather forecast.

“Reaching a distance of 27 meters between the posts was a real challenge in terms of mechanics and aerodynamics,” Debonnet explained. “Each span has ten to twelve photovoltaic modules and to support them would therefore require a steel beam weighing several tons. To lighten the structure, we opted for pre-drawn cables 30 mm in diameter, extremely resistant, like those used on cable cars, on which the rotating modules are fixed.”

He said the solution also has other advantages. It reduces the carbon footprint of the structure, thanks to the reduction in the number of tons of steel used. In addition, the more aerial structure improves integration into the landscape. Finally, it is completely reversible, with the possibility of modifying the type of cultivation and/or breeding. In addition, the shade can withstand gusts exceeding 260 km/hour.

“We have recruited aerodynamic engineers into our R&D team in Bourgoin-Jallieu, which has around 50 employees, because the matter of aerodynamics and wind resistance was fundamental,” said Dubonnet.

Each row of panels is controlled independently. In the event of high winds, they automatically place themselves in a safety position at a different inclination from the next, in order to break the wind and avoid the suction effect.

In 2022, TSE will start a major program of agrivoltaic demonstrators, with 11 pilot sites of 3 hectares and 3MWp of photovoltaic capacity each, spread throughout France. The very first, equipped with Canadian Solar photovoltaic panels, will be unveiled in September in Haute Saône. It will sell the electricity produced via a power purchase agreement, but the terms have yet to be specified. Subsequently, the other 10 will be equipped with modules from French manufacturer Photowatt. Finally, a second batch of pilot projects will be set up over the next three years.

TES has invested around €12 million ($13.2 million) of its own equity in developing the new technology.