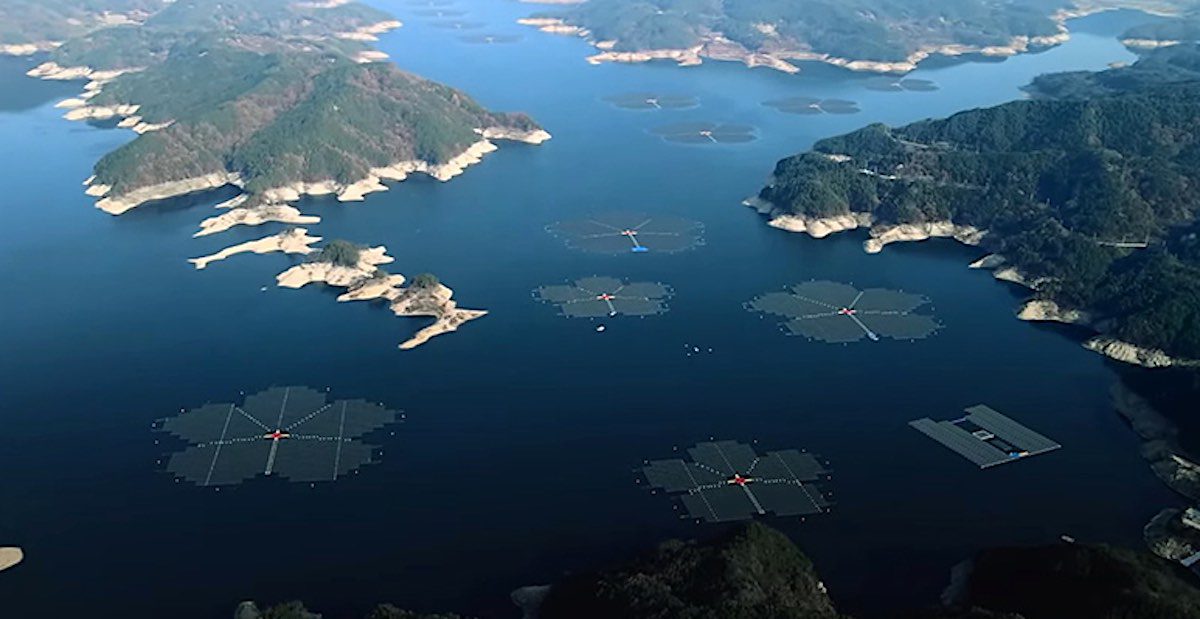 More than 92,000 solar panels in the shape of plum blossoms, floating on the surface of a reservoir in South Korea, offer a vision of how land-scarce developed nations can overcome local resistance to giant renewable-energy projects.

The 17 giant flowers on the 19-kilometer-long (12-mile-long) reservoir in the southern county of Hapcheon are able to generate 41 megawatts, enough to power 20,000 homes, according to Hanwha Solutions Corp., which built the plant.

It’s one of the biggest floating-solar plants in the world, and it’s in a nation that has been a laggard in adopting renewable energy — even though South Korea’s industrialized economy relies heavily on imported fossil fuels.

“South Korea needs a massive amount of renewable energy to meet its climate target, and floating solar can be a part of the solution,” because it faces less opposition from residents and doesn’t use land, said Kim Jiseok, a climate, and energy specialist at Greenpeace Korea.

At a commissioning ceremony for the plant in November, South Korea’s President Moon Jae-in said floating solar can help the nation reach its goal of becoming carbon neutral by 2050, with the potential to add 9.4 gigawatts — or the equivalent of nine nuclear reactors.

Floating-solar arrays have been gaining traction, especially in Asia, in nations like South Korea and Singapore where most available land for large-scale solar farms is already given over to buildings or agriculture.

Thailand built the world’s largest hydro floating solar-hybrid system on the Sirindhorn reservoir last year, and Singapore has started a 60-megawatt-peak plant on its Tengeh Reservoir. India plans to complete its huge 600 MW plant above the Omkareshwar dam by 2023.

“Floating solar is increasingly a popular option in countries such as South Korea, where land regulations and pricing, as well as local opposition, has made it increasingly difficult to build utility-scale projects,” said Ali Izadi-Najafabadi, a BloombergNEF analyst. “For water-reservoir owners, floating solar is doubly attractive as it adds a new revenue stream, while at the same time reducing evaporation.”

Floating projects typically benefit from an easier connection to the power grid, either via an existing link from a hydroelectric plant or because the reservoir is close to an urban area. Photovoltaic panels can also help restrict algae blooms, while the water helps keep panels cool in hot climates, increasing their efficiency.

They are costlier to build, though. Due to the need for floats, moorings, and more resilient electrical components, floating systems are considered about 18% more expensive than land-based ones, according to the World Bank.

Hapcheon shows how reservoir-based systems can help overcome one of the biggest obstacles to expanding renewables in developed nations — the not-in-my-backyard mentality of local residents.

The Hapcheon Dam was built in the late 1980s during the military dictatorship of Chun Doo-hwan, with villagers forcibly evicted in order to promote hydropower and irrigation. Cho Jaesung, 64, remembers catching fish and swimming in the river as a child, before the valley and his village was submerged.

The reservoir is now managed by state-run Korea Water Resources Corp. and when the floating power plant was proposed, Cho and other residents were given the chance to invest. Some locals were also offered jobs during construction, in an area where the average age is almost 60.

“We really didn’t have a choice when the dam was built over 30 years ago, but it was nice to be part of the nationwide transition from the start this time,” Cho said in an interview. “The project also provides an extra bit of money for older folks in the neighborhood, who mainly depend on their children.”

About 1,400 residents have collectively invested 3.1 billion won ($2.6 million), or about 4% of the total cost, expecting to receive a 10% annual return over 20 years. It was the community that requested the panels be arranged in the shape of blossoms to make the site more visually appealing.

The arrays use Hanwha’s latest technology — specially adapted for water, with greater resistance to humidity and heat, according to the company. Hanwha, Korea’s biggest producer of photovoltaic modules, is now working on a 63 MW floating plant on Goheung Lake in the south of the country, which would be the nation’s biggest.

“We see a huge potential in the global floating-solar market as more countries adopt the technology,” said Shin Hyungseob, general manager at Hanwha Solutions, which produces panels under the brand Q Cells. “We’re hoping to export the modules.”

Solar’s overall share of generating capacity will rise as countries strive to meet carbon goals, and floating panels are set to benefit, Wood Mackenzie said in a report.

While solar is South Korea’s leading renewable energy source, with 21 GW, the nation will need at least 375 GW to reach net zero, according to the Green Energy Institute.

“Even with the help of floating-solar plants, South Korea has a long way to go and little time to tackle the climate crisis,” said Greenpeace’s Kim. “If we don’t speed up the deployment of renewable energy now, we’re going to miss the deadline.”